The Austrian American Short Film Festival (AASFF) is the first ever bilateral festival featuring short films in all forms and genres by promising young artists and filmmakers from both Austria and the United States. The mission of the AASFF is to increase intercultural dialogue – to foster interconnectivity and the exchange of ideas between Austria and the U.S. Featuring discussions, Q&As, master classes and networking events, the festival provides a platform for young, emerging filmmakers and serves as an incubator for new ideas and projects, encouraging Austrian-American collaboration. The festival also aims at introducing emerging Austrian talent to the U.S. film community, as well as showcasing work by American filmmakers in Austria. An international Jury selects the best films. Awards will be given in the categories ‘Narrative’ and ‘Experimental’, to one Austrian and one American filmmaker per category, respectively. 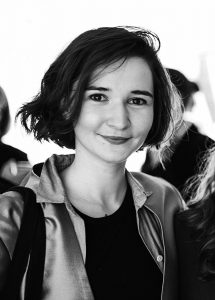 Stephanie Falkeis is a film director, writer and artist from Vienna, Austria currently based in New York City. She is a MFA Directing/Screenwriting Student and Fulbright Fellow at Columbia University and the Founder and Creator of the bilateral AASFF Austrian American Short Film Festival. Stephanie earned a MFA in Media Arts from the University of Applied Arts Vienna, studying in the Studio of Brigitte Kowanz. She also studied Screenwriting and Directing at Harvard University with Marcus Stern and Susan Steinberg, and Narrative Filmmaking with Thomas Arslan at the University of the Arts in Berlin. Stephanie creates a wide variety of content, from short features to documentaries, music videos to 360 Degree video installations. She is currently in pre-production for her third narrative short and finishing her feature film screenplay.

Filmmakers in the Audience

Creators of “Nocturne in Black”

Producer Inger of “The Art of Not Appearing”

An Evening with the Head of Jury

All images Courtesy of ACFNY/Fernanda Kock.

All images Courtesy of ACFNY/Fernanda Kock.